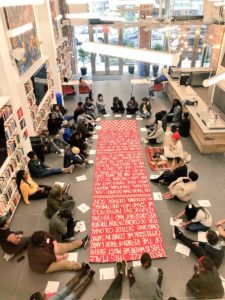 On October 13- 14, 2018 we convened students from over two dozen universities from around to country to build a #FreedomCampus Network.

We are holding a convening from October 25- 27, 2019 at Harvard University. For more information contact info@freedomtothrive.org

Grassroots Leadership led an effort to establish the first Freedom City. In June 2018 Austin City Council unanimous voted to pass a Freedom City Policy, which favors measures to increase the safety of people of color and immigrants in Austin. Austin’s Freedom City Policy will take steps to reduce racial disparities in arrests, reduce discretionary arrests, require full vetting and reporting on requests by ICE for APD resources, and ensure officers who ask about immigration status inform people of their rights to not answer, as well as complete a report explaining the encounter.

It is clear by the hundreds of people who showed up at City Hall that the community strongly stands with Black and Brown and immigrant communities.  No longer should communities be allowed to be over-policed, discriminated against, and ripped apart from one another due to racist policies. The city deserve policies that reflect the best interests of community members.

“This is an important first step for the city to take,” said Rebecca Sanchez of Grassroots Leadership. “This is a long term struggle and we are in part one of what is actually a decathlon. We’re committed to fighting for a city where we redefine safety for ourselves — and not through badges, and where we determine how our communities thrive.”

Freedom Cities Called for Divestment from Profit, Investment in People on May Day 2018

Freedom to Thrive (Formerly Enlace) led a multi-racial, multi-sector coalition united across the coasts on May Day 2018 representing the power of Freedom Cities. Over forty organizations marched with Enlace under the Freedom Cities banner in New York City, while in Oakland, the Ella Baker center turned in full force at a rally hosted by Oakland Sin Fronteras. Video of our Freedom Cities Immigrant Worker Justice Tour in NYC is below.