Skip to content
As we wrap up 2018, we are thrilled to share all the exciting ways that Freedom Cities and Campus have grown. Enjoy reading about the highlights below:
1. Beyond Alternatives to Incarceration
Freedom Cities had the deep honor of co-convening the “Beyond Alternatives” conference to discuss how to move past false alternatives to the prison industrial complex, towards transformative solutions. Shout out to on-the-ground Freedom Cities member Grassroots Leadership for bringing us together in Austin!

Freedom Cities member organizations from Oakland, Los Angeles, New York, and Austin, as well as partners from across Texas and across the country, worked toward a collective vision of how to shrink the carceral state and move towards abolition. This convening was a response to years of research by Grassroots Leadership to counter the expansion of false, reformist alternatives that make up thetreatment industrial complex.

Our organizers repped and shared critical insights from the following Freedom Cities campaigns:
1) How #SwipeItForward held down by BAJI and Million Hoodies in NYC enables folks to see the connection between divestment from police & investment in community wellness
2) How the Audit Ahern campaign held down by the Ella Baker center in Oakland is calling for an audit of the sheriff through a public health approach to safety
3) How Portland divested from all corporate securities, including private prison companies, through support from Enlace
4) How IDEPSCA’s day laborers are leading the fight against the privatization of police at Home Depots across Los Angeles

There was power in bringing our campaigns together, and understanding the threads that bind us as we move towards shared visions.
2. Freedom Campus National Training
We brought together over 30 students from across 20 campuses across the country, representing networks such as Umoja, Enlace, Million Hoodies, Seeding Change, Dream Defenders, Florida Immigrant Coalition, Freedom U and more.

Together, we built on our relationships to further the work of co-creating a network of Freedom Campuses that is demanding their universities divest from institutions & practices that harm us, and re-invest in collective liberation.

We had current and former student organizers with historic divestment victories- including from Columbia University and the Afrikan Black Coalition (University of California) prison divestment campaign, share their deep insights and strategies, to be translated by our students.
We integrated the arts and healing justice, calling in our ancestors, and reminding ourselves the work begins within us.

3. All Eyes on the Sheriff Rally and March
The Ella Baker Center and partners marched to the Alameda County Board of Supervisors to demand an audit of Sheriff Ahern, whose budget has doubled, even as the population of incarcerated folks has decreased by almost half. Folks marched with 34 body bags, representing the 34 in-custody deaths that have occurred under Sheriff Ahern’s watch since 2013.

This action took place on the same day as the release of What’s Up With Our Jails, an explosive report from Oakland Community Organizations that reveals multiple human rights violations and poor conditions in the Alameda County jail system.

Chapter members organized events throughout the country. In NYC, Million Hoodies members held the “Safety & Justice Townhall,” where the community shared its visions for re-defining safety. Here is a quick snapshot of the conversation:

5. US Campaign For Palestinian Rights – Airbnb Victory!
Airbnb will remove 200 home-sharing listsin illegal Israeli settlements built on occupied Palestinian land in the West Bank. Major props to years of work by the StolenHomes Coalition – which includes Freedom Cities member organization US Campaign for Palestinian Rights.
“Airbnb’s decision today to remove listings from illegal, Jewish-only settlements in the occupied West Bank is proof that support for Israel’s separate-and-unequal apartheid regime is becoming more and more untenable. Airbnb’s decision to stand on the right side of history is a direct result of a sustained grassroots campaign led by those working in solidarity with the Palestinian struggle for freedom, justice, and equality. Once again, in the spirit of the campaigns to end apartheid in South Africa and Jim Crow in the South, people power leads to social justice!” said Ramah Kudaimi, Director of Grassroots Organizing, US Campaign for Palestinian Rights. 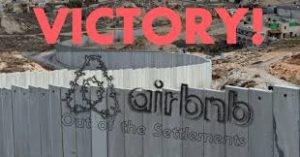